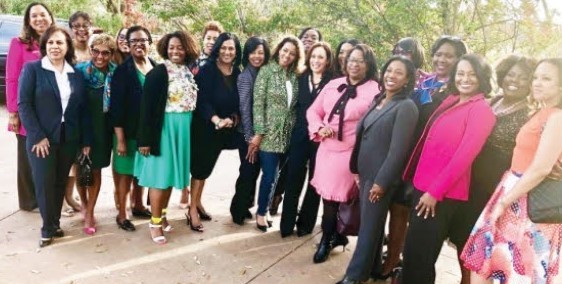 Just had to look at that and breathe deep. Howard University, despite its flaws and blemishes, has produced some absolute intellectual thoroughbreds, and we are proud to count Kamala Harris as one. Howard has long been a proving ground where the good become great academically and intellectually (not the same thing) and I am proud to claim it as my Alma Mater. As a freshman at Howard 35 years ago, majoring in Political Science and Economics, I encountered Kamala Harris and was amazed. She was then, and is now, a BOSS in every sense of the word. In Howard Vernacular, she was a DIVA.

Every department at Howard had a set of students that were a cut above—respected by professors who were giants themselves, clear campus leaders for their intellect and vision, strong enough to create a different future than the one we were assigned. Kamala Harris was THAT sister. Didn’t play in the classroom, could mop up ANYBODY in a debate, and destined to push her way to the front of whatever she decided to do.

Economics was a department full of policy wonks, math nerds, and folks who thought a Friday night discussion of Keynesian Theory was fun. Folks didn’t exactly know what it would lead to—none of us knew or had ever met an “economist,” and for first-generation students such as myself, somehow, education had to translate to the ability to earn a living. Several of us combined studies and double majored in Political Science with the now hysterical idea that “well at least I can go to law school and get paid in full…”

Political science was one of the strongest departments at the University. Scholars such as Ron Walters, Alvin Thornton, Joseph McCormick and Lorenzo Morris not only completely mastered their disciplines but served as cerebral role models for many of us. This is the fertile soil in which the Kamala Harris political roots were planted. We were given the highest quality academic instruction, but we were also given the clearest of mandates: lead, don’t follow. Put your people first. Do, Act, and Be Black. Know your history. Be better than anyone expects. Be consistent. Never stop growing. This is what Kamala Harris reflects as she aspires to serve her country in perhaps our greatest contemporary hour of need.

Hard to go all the way back to those roots in Frederick Douglass Hall so many years ago…we were literal children—18, 19, 20 years old, away from home for the first time, making daily mistakes, trying to learn who we were and what part of the world we fit into. I am convinced that we had more fun than any other group of people on earth. We learned, sometimes by failing that the spirit inside us was and is unbreakable, that the people sitting in the lecture hall next to us would be obligated by their education to serve, to break glass ceilings, to demonstrate effectiveness, and to motivate and lift others around us.

The world at that time was such a rapidly changing place the late 80s brought us Reaganomics, the fall of the Berlin Wall, the Iran-contra scandal, the explosion of crack cocaine that destroyed the community’s many of us came from while we were away partying for our right to fight, and not coincidentally, the 1988 presidential campaign of Rev. Jesse Jackson. Student Kamala Harris was studying Political Science and Economics at America’s preeminent HBCU, led by the best professors I have ever encountered, right in the middle of all that.

“VERITAS ET UTILITAS.” Howard University’s motto translates as “Truth and Service.” Not a slogan, but a real, measurable intellectual practice and commitment top to bottom. Howard grads find themselves living this motto. Did it work? Was it worth it? Were the sacrifices necessary to tunnel under and climb over walls in front of us? Kamala Harris is poised to become the Vice President of the United States of America. I think it worked. This is really not hard to figure out. I’m voting for Joe Biden and Kamala Harris as the future leaders of this country and encourage anyone reading this to do the same.

Derrick Payne is a Professor at El Centro College and an alumnus of Howard University.