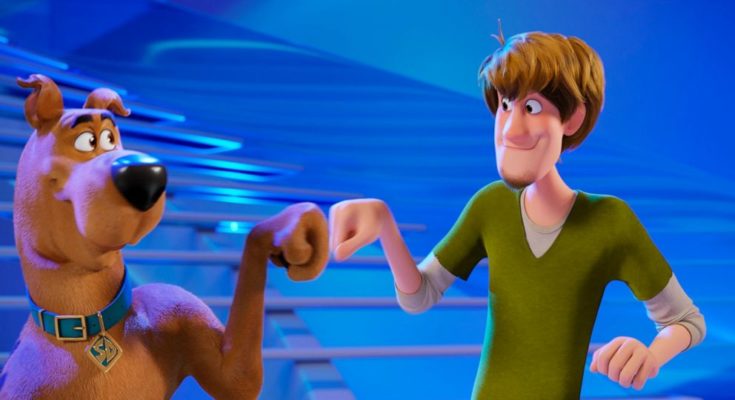 SCOOB!, now showing on Pay Per View for $19.99, was originally set for theatrical release, so it’s filled with big-name voice talents like Will Forte (Shaggy), Mark Wahlberg (Blue Falcon), Zac Efron (Fred) and Tracy Morgan as a character named Captain Caveman. It also stars Frank Welker, the original voice of Scooby-Doo. The characters are great and the animation is even better. The film is shot in a combination of 2D and 3D animation which gives the movie a modern style with an old-style feel. The movie starts with Scooby and Shaggy as younger versions of themselves. Shaggy is less of a stoner and more of a slacker in the movie and in the opening scene, Scooby is on the run from the cops after stealing some Scooby Snacks (a big roll of salami) from a grocery store.

Shaggy manages to convince the cop that Scooby is his dog, and the two become fast friends over some shared salami sandwiches. The two later hook up with Fred, Daphne, and Velma on Halloween night and capture Dick Dastardly, who tries to use a fake haunted house to store a bunch of stolen electronics. Dastardly vows revenge on the kids for spoiling his plans; and meanwhile, after solving their first mystery, The Mystery Crew is born. The film jumps forward to the present day, and the crew finds themselves in their biggest mystery yet: Shaggy and Scooby have to try to save the world from Dick Dastardly’s evil plot to take over the world while the mystery crew tries to find their friends and come to their aid.

The crew split up after Simon Cowell, voiced by the real Simon Cowell, becomes the group’s agent and wants the slacking and snack-obsessed Shaggy and Scooby out of the group. SCOOB! is a great film for the entire family and is the first movie in a new Hanna-Barbera Cinematic Universe. The movie has a great message for kids about friendship and about the importance of never giving up. The film is rated PG for a few adult situations and has a run time of just over 90 minutes.

My entire family really enjoyed it and on my “Hollywood Popcorn Scale,” I rate SCOOB! a JUMBO. Also, don’t get off the couch until after the movie’s credits. There are some bonus scenes at the very end of the movie.