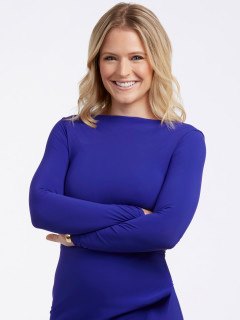 –Women That Soar, LLC, a Dallas-based media company, and Founder Gina Grant are delighted to announce Sara Hines, co-host of GMA3: Strahan, Sara & Keke will host this year’s “Women That Soar” Awards, which celebrates its 12th year anniversary and its sixth syndicated televised broadcast! In honor of a new decade and partnership with the City of Dallas, Women That Soar, LLC will produce two shows this year. It is a year-long celebration of honoring women kicking-off February 15, 2020, at the Statler Hotel Dallas, and a second show, November 21, 2020.

The “Women That Soar” Awards is Executive Produced by Grant along with her producing partner, legendary Hollywood Producer, Reuben Cannon. The producers are dedicated to creating a global platform and content for women that is edifying, empowering and uplifting. “The 2020 Awards is more than a show honoring women,” says Grant. “We are dedicated to telling stories that will empower all women to believe they too can Soar. This year we are encouraging love, hope, and unity.” It is the only televised awards show to air in March, during “Women’s History Month.”

The black-tie, star-studded gala is not just another awards show; it is the kick-off to an entire year of celebrating the accomplishments of women from around the world by bringing a diverse group of women together on one stage, to honor, empower and inspire one another! The 2020 honorees are a group of innovators with diverse achievements in the following Award categories: AJ Andrews (Sports Award), Loung Ung (Global Activist Award), Rhonda Sergeant Chambers (Community Award), Maria Christina Brown (Mentorship Award) and LaToya James (Entrepreneur Award). Each honoree will receive a customized, signature Women That Soar Award designed by renowned sculptor Angela Mia De la Vega.

The evening will also feature an amazing line-up of musical guests including: Grammy Award Winner Gretchen Wilson, Gospel Music Superstar Yolanda Adams, Actress, Singer and Dancing with the Stars Champion Amber Riley and Tenille Arts! Hollywood comes to Dallas for the 12th Annual Nationally Televised “Women That Soar” Awards on Saturday, February 15, 2020! The show tapes at The Statler Hotel located at 1914 Commerce Street in Downtown Dallas from 6 PM to 9:30 PM.

For more information on Women That Soar or to purchase tickets, visit: womenthatsoar.com. Women That Soar’s title sponsors are American Airlines and Toyota. Join the conversation on social media by logging on to our social media platforms: • On Twitter @WomenThatSoar.