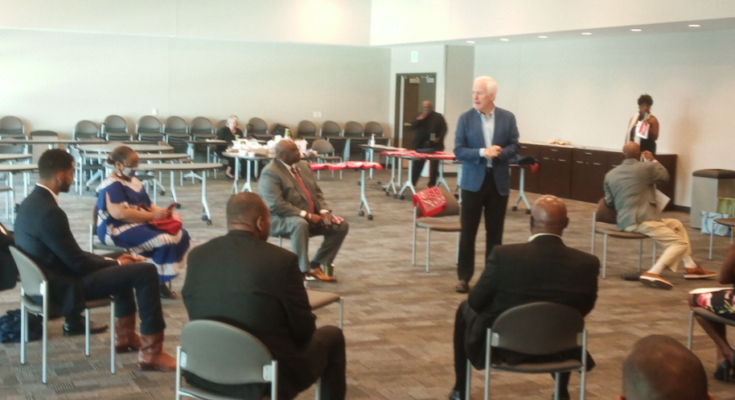 School choice, prison reform and economic opportunities were uppermost on his mind as he spent at least an hour answering questions.

While he fielded many questions on helping the formerly incarcerated, the senator stressed the importance of economic growth and development and he didn’t flinch when told he needed to have Black people working in his office and also when questioned about social unrest across the controversy.

Citing George Floyd, who was killed by police officers in Minneapolis, MN. Sen. Cornyn said the “original sin of the United States was to claim to treat everyone as equal but to treat Black people as less than equal and we’ve been paying a terrible price for that…we are still paying the price.”

He also said there was no justification for the looting and vandalism that has occurred in several cities.

State Rep. candidate Will Douglas was in attendance and received the senator’s endorsement.

Abilene (Tex) Mayor Anthony Williams, who is doing well after battling COVID-19, spoke during the gathering and shared information about the Senator’s contributions to the growth of Abilene.

Senator Cornyn was accompanied by his wife, Sandy.