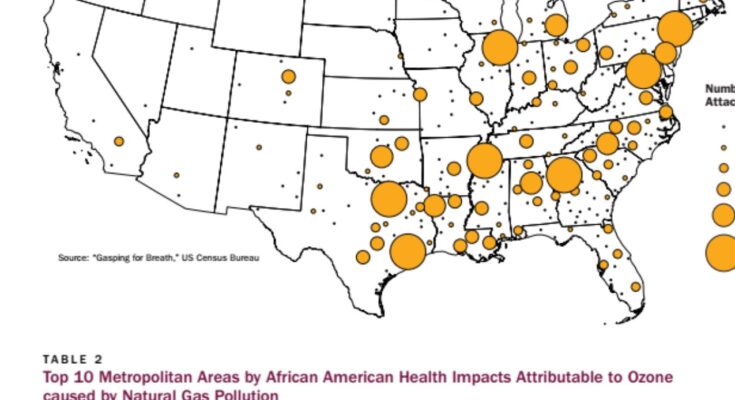 Fence-line communities: are communities that are next to a company, industrial, or service facility and are directly affected in some way by the facility’s operation (e.g. noise, odor, traffic, and chemical emissions). Most fence-line communities in the United States are low-income individuals and communities of color who experience systemic oppression such as environmental racism.

Some would say that these communities are definitely on the other side of the railroad tracks—the area where there are more dirt roads, liquor stores and food deserts—the hood!

The National Medical Association, Clean Air Task Force and NAACP co-released a report in November that unfortunately was overlooked during many news cycles although the findings were significant when you consider the number of African Americans impacted.

In a 34-page report, “Fumes Across the Fence-Line: The Health Impacts of Air Pollution from Oil & Gas Facilities on African American Communities,” the results are alarming to say the least.

According to the report, the oil and gas industry dumps 9 million tons of methane and toxic pollutants into the air each year. These toxins are not only contributing to the ozone level, but also increased medical and funeral bills.

“African Americans are disproportionately exposed,” said Dr. Mark Mitchell of the National Medical Association. “Deaths are increasing, and there are more cases of asthma in children and cancer in adults.”

Oil and gas is big business, especially in Texas, and other states like California. “Just because the oil company brings jobs and other benefits, doesn’t mean it can do it at the expense of my health and well-being” said Charles Zacharie, of Los Angeles.

Residents in the Dallas-Fort Worth area should definitely be alarmed, Dr. Mitchell warned.

“Dallas is the number one location in the U.S. where African Americans are exposed to these fumes,” he said, adding that it is estimated that African American children are losing about 6000 school days because of illnesses associated with the oil and gas leaks.

Until 2015 many of those children found themselves before a judge, with their parents, facing fines and possible detention. Even some parents were fined, or directed to attend after school sessions with their children.

This is definitely an area of concern because of the high Texas truancy rates, as well as children born with learning disabilities; although health issues were not a consideration in a U.S. Dept. of Justice report that looked at truancy in Dallas County, instead focusing on “poor school climate and inadequate identification of special education needs to teen pregnancy, negative peer influence, child abuse or neglect, poor academic performance, low school attachment, and students’ lack of self-esteem.”

Then there are the deaths that must be considered. African American children are more likely to die from asthma than white children (one per 1 million versus one per 10 million, respectively).

Oil and gas leaks are the issue, a critical one that must be addressed. “The life-threatening burdens placed on communities of color near oil and gas facilities are the result of systemic oppression perpetuated by the traditional energy industry, which exposes communities to health, economic, and social hazards,” reads Fumes Across the Fence-Line.

Because natural gas does not have an odor, experts say, people don’t know they are being exposed. Odorless and silent, but deadly.

The report points out that African Americans are exposed to 38 percent more polluted air than Caucasian Americans and they are 75 percent more likely to live in fence-line communities than the average American.

And there are many symptoms associated with different air pollutants, including nausea, headaches, asthma attacks and dizziness.

Texas has the dubious distinction of having two cites on the list of Top 10 States by African American Population Living within a Half Mile Radius of Oil and Gas Facilities.

“Common sense would suggest that a pipeline carrying a highly flammable substance and a massive polluting industrial facility should not be placed in any residential community, much less an environmental justice community”– Congressmen Sanford D. Bishop, Jr., John Lewis, Hank Johnson Jr., and David Scott in a 2015 response to the Saber Trail Pipeline Project in Alabama, Southern Georgia, and Central Florida.

Identifying the problem was important and offering solutions is equally important, says Dr. Mitchell. “We are concerned about the health of our communities.”

Dr. Mitchell says Texas can follow the lead of California and Colorado with better guidelines and by reducing the amount of exposure to citizens.

Unfortunately in communities that are not as educated, there is an assumption that it is normal to have asthma or cancer. That is not the case said, Dr. Mitchell, “Our communities are suffering. There are more cases of cancer like blood, lymphoma and leukemia.”

Churches, organizations, businesses, community groups, politicians, healthcare professionals, and friends need to be discussing this issue. These death traps need to be located exposed and dealt with.

It’s simple, Dr. Mitchell concluded, “If there is a leak underground, you can usually tell because grass does not grow in those areas. But the greatest indicator of where they (oil and gas leaks) are located is the percentage of people of color.”

This report is available online at:

www.oilandgasthreatmap.com to find out if you live in an area where you should be concerned.