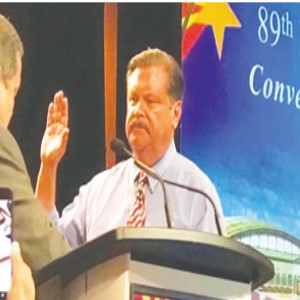 Phoenix, Arizona – On Saturday, July 21, 2018, the temperature was above 100 degrees, but the weather was not all that was hot! The USA’s most recognized Hispanic Organization, League of United Latin American Citizens (LULAC) held its 89th Convention and the number one resolve was to elect its National President.

The election was held mid-morning to early afternoon and the voting process took approximately six hours. As current president, Roger Rocha taps on the microphone to get audience attention, mostly to quiet down the crowd who was already chanting, “Domingo, Domingo, Domingo,” he calls the numbers, “for Domingo Garcia, 713 votes, for Darryl Morin 237. Mr. Garcia has pledged to continue his work to help the undocumented, so they may be treated with respect, to revamp the organization, to continue his efforts for the Dreamers, and to increase the LULAC membership to one million members.

Mr. Garcia received his B.A. in political science from the University of North Texas in 1980. In 1983, he obtained his J.D. from Texas Southern University in Houston. He earned a Master’s degree in International Relations from El Colegio de Mexico in Mexico City.

In 1988, Mr. Garcia was elected to the Democratic National Committee, where he served for eight years. He sat on the executive committee and was chair of the Latino caucus.

He also served on the Dallas City Council from 1991 to 1995 and in 1993, Mr. Garcia became the first Latino ever elected Mayor Pro Tem for the City of Dallas.

Mr. Garcia also served in the Texas House of Representatives from 1996 to 2002. During this time, he served on the Criminal Jurisprudence and Judicial Affairs Committees.

In addition to the election, there were many “hot” things going on at the convention.

If we would have to give Mr. Garcia credit for something, I would credit him for: being co-author of the original “Texas Dream Act” [House Bill1403], June 16, 2001, sponsored by Leticia Van de Putte (D-San Antonio) and co-authored by Rick Noriega (D-Houston), Fred Hill (R-Richardson), Elvira Reyna (R-Mesquite), and Ismael Flores (D-Plainview); and providing the verbiage that he submitted to President Obama for the implementation of the “Deferred Action” which took place on June 15, 2012, allowing young DACA (Deferred Action for Childhood Arrivals) and students to remain in the USA and allowed to have workers permits.

Mr. Garcia has an immense love for the citizens of our great Nation, especially those who have encountered civil rights violations.

His love for the community is inspiring to say the least.

That love has been a blessing to many families and he has utilized his civil rights organizing skills to bring attention and action to many civil rights issues especially the most recent discrimination of immigrants and the separation of children from their parents.

He is known to be considered “El Padre de la comunidad,” for his philanthropy and his support of numerous scholarships and other contributions to so many entities and persons.

Finally, and most importantly, he is a God-centered man, an honorable husband to his lovely wife, Dr. Elba Garcia (Dallas County Commissioner District 4, and a dentist), and a great father to his two sons, Joaquin and Fernando.

He is the proud son of immigrants and of native blood lines.