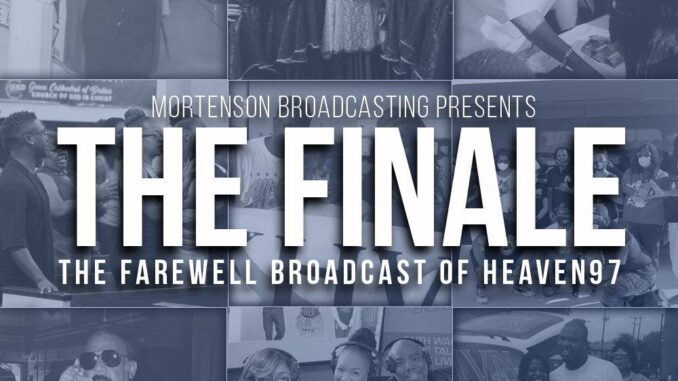 Editor’s Note: This is a developing story. We will provide updated and additional facts as they become available.

While many are anxiously awaiting the start of 2021, a longtime voice in the community is preparing for its final run.

Mortensen Broadcasting, an independent company that owns mostly Christian stations, sold the station along with its sister network AM 1630 KKGM for $950,000.

As part of the purchase agreement, iHeartMedia will drop the gospel and community news formats the stations are known for in favor of a newly branded Black Information Network (BIN), an all-news radio concept targeting the African American community.

The news service, which launched on June 30, carries mostly national stories and features, and will begin operating on January 2, 2021.

Representatives for the network said BIN adds value as the first and only around-the-clock service dedicated to providing “objective, accurate and trusted” news coverage with an exclusively Black voice.

Coles, who also serves as Division President of the iHeartMedia Markets Group and has more than 35 years’ experience in the radio industry, said the idea for the network had been under development since 2019 and became especially relevant following key events that occurred around the country earlier this year, including the tragic death of George Floyd at the hands of Minneapolis police officers in May.

“Now is the time for our voice to be heard,” he added. “I could not be more proud of our work and the team we are assembling at BIN.”

While the network believed it secured a “win” with this fresh focus on the Black perspective, for longtime supporters of KHVN, a community staple that had served Dallas-Fort Worth since 1985, the fallout was swift.

Following news of the sale, both listeners and the station’s news personalities expressed both grief and support for the soon-to-be-defunct station.

But, it doesn’t have that local connection that we have developed for the last 30 years,” he added. “It (BIN) is a disservice to the local community because you’re unplugging local information for nationwide information. If you’re local…you need local information.”

Loyal listeners with fond memories of the station agreed.

“I grew up listening to Joe Bagby and Robert Ashley,” said Lisa Trotter, the former Garland resident who was still an avid listener, even after relocating to Arkansas.

“Heaven97” has been a part of my life since I was a little girl.”

“KHVN was a great part of the community,” she continued. “I can remember them raising money to help people in need, not only with feeding the community, but I (also) remember families that could not bury their loved ones and KHVN reaching out to help.”

“I will probably listen to the Black Information Network to see if they will keep the African American community informed like KHVN did. But if this new forum does not work for me, I will probably just listen to the iHeart radio gospel station on SiriusXM, Kirk Franklin Praise.”

Hoping to turn things around “late in the midnight hour,” area resident Pamela Young posted instructions across social media, hoping her post encouraging folks to sign a petition for the FCC would go viral.

In her plea to Facebook users Tuesday she hailed KHVN as a vital mainstay for local, Black news, information and inspiration, and called the new deal “inconsistent with the public interest.”

“DFW stands to lose so much if and when KHVN goes,” she said. “The station is one of a kind in this area, and there is no other station like KHVN that caters to Black people who want to hear gospel music and have a couple hours a day for local news and current events that they can engage and interact with.”

Because the sale has already been approved by The Federal Communications Commission (FCC), an independent agency of the United States government that regulates radio across the United States, the new licensing agreement under iHeartMedia, Inc.,will most likely go into effect in the new year.

For long-time residents of Dallas-Fort Worth this story may sound familiar: After being sold in 2013, another local station, KKDA-AM, began operating under a new format, Korean language radio, in 2013.

For Robert Ashley, after 30 years, his party may be on pause, but it’s certainly not over.

“Our objective was to bring the community a local line of communication through talk shows and other local formats,” he said. “I got my career started when I graduated from Grambling State University in television. I’ve always thought of resurrecting a career in television news. There’s not many African American male talk show hosts, so I’m just taking inventory.”

“I’ve appreciated the support of the community with my journalistic endeavors here in Dallas-Fort Worth, and as the late Nipsey Hustle said, ‘The Marathon Continues.'”

Listeners are invited to join the staff of KHVN for the final broadcast of Heaven97 on January 1. KHVN has also asked supporters to share their memories of the station by calling 817-381-6112 and leaving a voicemail to be played on air.