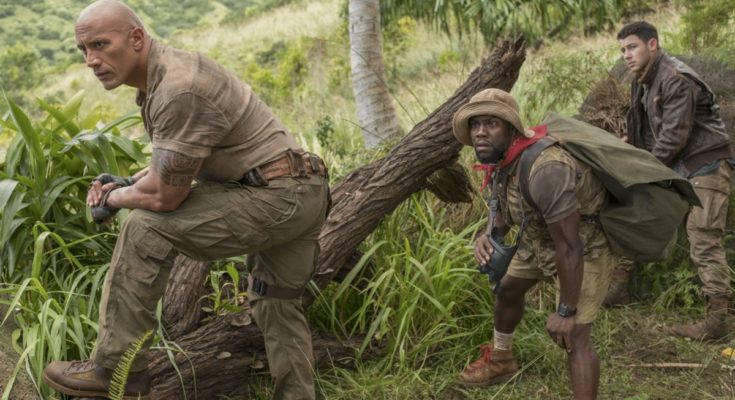 Jumanji: Welcome to the Jungle is a remake of the original 1995 movie starring Robin Williams. However, this version has been updated. Now, instead of the game coming alive, the four main characters, including Dwayne “The Rock” Johnson, Kevin Hart and Jack Black, play avatars who are sucked in to the game.
Jumanji is a great adventure/comedy with the actors playing characters who are entirely unlike their movie counterparts. The movie begins with a “Breakfast Club” vibe, with four teenagers from different social statuses spending time in detention. That’s where the find the video game and the adventure begins.
When they are sucked into the game, the four high school teens must now come together to play their way out—each player gets assigned three lives—or they will die in the game for real.
The pursuit to win the game is a great adventure and the characters are a laugh a minute. Both Kevin Hart’s and Jack Black’s characters deliver most of the comedy. Hart plays Fridge, a high school football player who is about two feet taller than his avatar, and Black, whose avatar is Professor Shelly Oberon in the game, is Bethany, a popular teenage girl, in the real world; he plays the professor like a spoiled girl throughout the movie.
Johnson does most of the heavy lifting on the adventure part of the movie, along with Karen Gillian, who plays Martha, a high school geek in real life but a “Lara Croft: Tomb Raider” type character in the game.
Jumanji: Welcome to the Jungle is a great family film and suitable for all ages. It’s rated PG-13 and runs at 1 hour and 59 minutes. On my “Hollywood Popcorn Scale,” I give it a Jumbo.