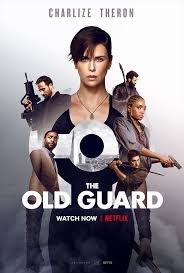 The Old Guard is an action-adventure film from the same director who brought you Love and Basketball 20 years ago, Gina Prince-Bythewood. The movie stars Charlize Theron, who at first glance is a mercenary who goes on missions to help the downtrodden all over the world, but we quickly discover she is so much more. It turns out she has the powers of immortality and has been fighting, with a group of immortal crusaders for over 600 years. As a matter of fact, she’s tired of fighting battles for mankind and it takes a new member of the group to reinvigorate her will to keep fighting. A young Marine named Nile, played by Kiki Layne, is killed during a terrorist mission in the Middle East and is mysteriously brought back to life and joins the group. While Theron’s character Andy is self-assured of her immortality, Nile is uncertain with her new powers and the two women work together to teach the new member of the team the ropes.

However, the thought of living forever is not easy to deal with for either female warrior. The movie, which is based on a graphic novel, gives us plenty of action with martial arts fight scenes and guns, knives, and swords. If you like action, you’ll love The Old Guard because the action never stops. Chiwetel Ejiofor also stars as a former CIA agent who unknowingly works for the bad guys while thinking he’s doing something good by harnessing the power of the immortals to use for good to help mankind. He ends up as an ally for the group of fighters who’ll live forever. Theron is strong as Andy and Kiki Layne as Nile plays her character excellently as the young soldier who doesn’t understand her immortality. She just wants to see her momma. By the way, the end of the movie gives all indications that there will be a sequel to the film. The movie is rated R for graphic violence and has a run time of 2 hours and 5 minutes. It’s a non-stop action-adventure and on my “Hollywood Popcorn Scale,” I rate The Old Guard a JUMBO!