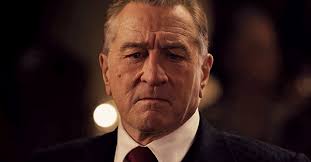 Martin Scorsese reunites Robert De Niro and Joe Pesci in his latest gangster film The Irishman. Al Pacino also stars as labor organizer Jimmy Hoffa. The Irishman is very different however from Scorsese’s previous movies with De Niro and Pesci. This movie is about a mob hitman who tells his story from a nursing home wheelchair.

It’s a melancholy tale about DeNiro’s character, Frank Sheeran, who’s the last of a group of criminals who remains alive. He also talks about his involvement in the death of Hoffa. Sheeran earned his nickname while fighting in World War II in Italy.

He’s fluent in Italian and along with Pesci’s character Russell Bufalino, a boss in the Bufalino crime family, and one of a handful of non-Italians in the mob. Frank’s story is an interesting one; going from a truck driver to a hired killer and a bodyguard for union leader Jimmy Hoffa, played brilliantly by Al Pacino.

Hoffa is a hardcore union leader who not only fights the government and big business for the union’s rights; he’s also a rough and rugged man who demands his personal respect. He is not someone colleagues can mess with. After a long story about his life of crime, De Niro’s character becomes reflective about all the things he’s done and along with repenting for his sins. He also prepares for his own demise as a gangster who is now in his 70’s.

For the movie, a “de-aging process” is used to show the wide range of ages that the characters go through. This is an excellent movie that suffers from one major flaw. With a run time of 3 hours and 29 minutes, it is simply too long! The movie is rated R for intense violence.It’s out now in limited release (it’s showing at The Texas Theatre) and it will open in wider release. It also starts a run on Netflix on November 27th. Even with the long run time, this is an Oscar-caliber movie and on my “Hollywood Popcorn Scale” I rate The Irishman a JUMBO.