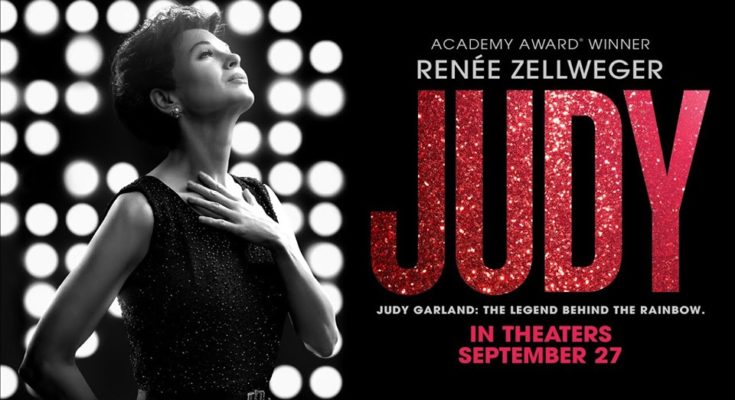 Renée Zellweger gives one of the best performances of the year in the biopic about the last few years in Judy Garland’s life in the new movie called Judy. She transforms herself into the drug-addicted performer so convincingly you almost feel its Judy Garland on stage living through the pain and the joy that made up the faded stars life.

The movie is based on the stage play, End of the Rainbow, and reveals things about the iconic star that most of us only thought we knew. During her fifteen years as a contract actor with MGM Studios, she was abused, forced to take drugs and was body shamed and told she was ugly by studio head Louis B. Mayer. (The studio denies she was mistreated in any way.)

She was assigned a chaperone who gave her drugs for everything from suppressing her appetite to pills to make her fall asleep and wake up. The fifteen year-old wasn’t even allowed one bite of a hamburger. The studio feared the Garland, who was only 4 ft 11 in tall would look fat on camera. So, Mayer deprived her of food and controlled her with prescription pills.

After finally not being able to keep up with the demands of the studio, she was fired and, because of bad management and the poor financial advice of her handlers, she was left broke. Unable to provide for her two children, she gave up custody to her ex-husband (she was married four times). She set off for Europe, where she was still wildly popular, and attempted a comeback on stage in London.

She had her ups and downs on stage but her severe drug addiction kept popping up whenever she was having brief periods of success. There are some tear-jerking scenes in the movie where the melancholy singing of Zellweger brings down the house, but ultimately the steady cocktail of drugs that the movie company forced on her caused her demise at the age of 47.

Judy is rated PG-13 and has a run-time of 1 hour and 58 minutes. There is a quote that appears on the screen right after the movie. “The heart is not judged by how much you love, but by how much you are loved by others.” Judy Garland was loved by many.

On my “Hollywood Popcorn Scale” I rate Judy a JUMBO