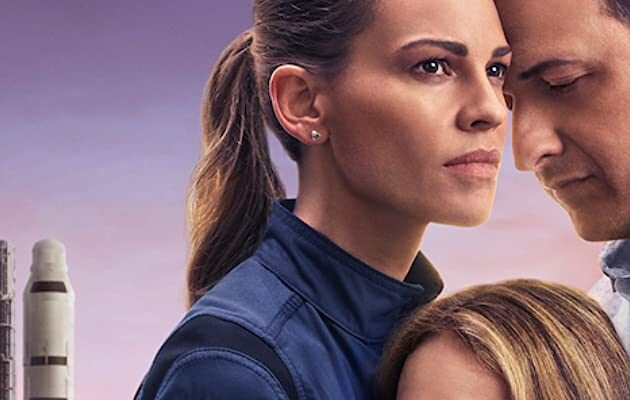 Academy Award winner Hillary Swank is American astronaut Emma Green in Netflix’s Away. While it’s a good sci-fi thriller about the international crew, who hope to be the first humans to walk on Mars, it also has so many interesting side stories about the crew that really make the mini-series worth watching.

Hillary Swank is the leader of the crew and plays a mother who left her husband and teenage daughter behind to complete her two-year mission. Josh Charles portrays Astronaut Matt Logan, Emma Green’s husband, who suffers a stroke which causes him to be grounded from the life he loves. The rest of the crew have issues of their own. There’s a female Chinese chemist, Vivian Wu, who’s in a loveless marriage and gets involved in a lesbian love affair before leaving for the mission.

There’s also a Russian cosmonaut who has personal issues with his daughter after not being there when her mother died. He was in space. Although he’s the most experienced in space, his eyesight and his health are failing him now. It’s something he keeps a secret until he is forced to admit it by the ship’s commander, Emma Green. There’s also an Indian doctor on board and an African botanist on the team that rounds out the cast.

I’ve seen about half of the season’s episodes and each new episode has an interesting twist that not only tells the science fiction aspect of the series but shows a very human side of the characters. For me, that’s what makes Away such a good series. There’s already talk of a season two of the series. Each episode has danger and perils and also some very adult stories going on. It’s very enjoyable and I plan on doing some binge-watching to finish up the series. On my “Hollywood Popcorn Scale,” I rate Away a LARGE.